A Guide to Poisonous Plants for Homeowners

If you are planning to grow plants at home, then you should be aware of some poisonous plants that can cause harm to humans and beloved pets. Some species of plants may even invade your yard without you knowing, and a pet or child may unintentionally ingest or come into contact with a dangerous plant. Keep reading to learn more about common poisonous plants that could make their way into your yard or garden.

Some plants are poisonous, but others can be beneficial. For example, many poisonous plants have medicinal properties that help people with certain health conditions. However, many plants contain toxic chemicals that can harm humans if consumed or come into contact with their skin. Some plants also cause allergic reactions in people sensitive to the plant’s pollen, leaves, roots, flowers, or other parts. Other toxic plants can cause more severe symptoms like cardiovascular or gastrointestinal reactions. The following list includes common poisonous and potentially dangerous plants.

White snakeroot has two distinct characteristics: the appearance of its white flowers in the fall and the appearance of its green leaves in the spring. Look for intricate, curving patterns on some leaves. These come from a species of fly that lives on White Snakeroot. The fly lays its egg on the leaf, and then the larvae feed on the leaves, creating beautiful though destructive patterns. Gardeners may similarly recognize these patterns as a classic sign of leaf miners attacking vegetables such as chard, beet, spinach, and tomato plants.

Lily of the Valley

Other names for Lily of the Valley are May bells, Our Lady’s tears, and Mary’s tears. Every part of the plant is poisonous.

Lily of the valley flowers are bell-shaped and grow on a leafless stalk. They bloom for about three weeks. The leaves are located near the base of the plant. The delicate white or pink flowers are fragrant. You can harvest the plant as a decorative flower or for its cardioactive herbs.

Hydrangeas are toxic plants, so enhanced attention is required if you plan to grow them in your garden. You must take precautions to prevent ingestion or dangerous exposure if you have pets and small children at home.

Hydrangeas are beautiful flowers, but they can be dangerous for any mammals that might get into the habit of eating leaves or blooms. 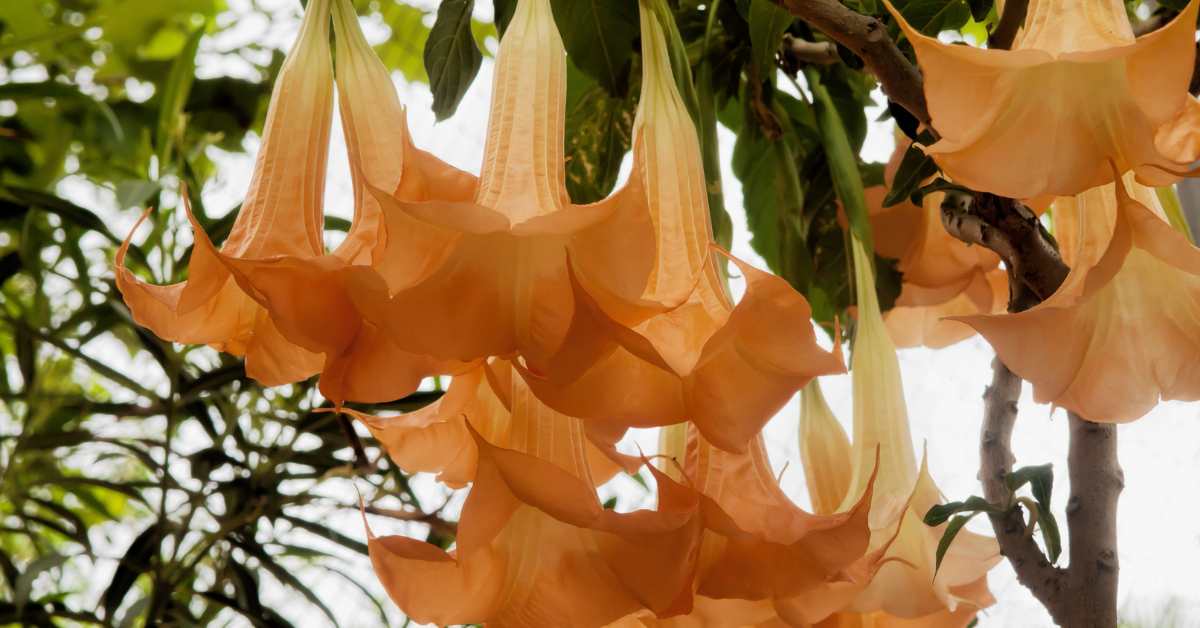 All parts of the angel trumpet plant are highly toxic, including its leaves, flowers, seeds, and roots. They all contain the toxic alkaloid scopolamine, at­ropine, and hyoscyamine, which are widely synthe­sized into modern medical compounds but are deadly poisonous when used outside a doctor’s supervise­ment.

All parts of the plant are dangerous, but the oblong, fruit-like seed pods and colorful flowers pose the greatest risk in your home landscape because they are visually appealing for curious children and hold the highest concentrations of toxic chemicals.

Oleanders bloom throughout the summer into fall and are found along roadsides in southern states, as well as the west coast of the U.S. This plant can grow up to 6 feet tall and withstands dry conditions and wind. It has been grown as a decorative plant in other parts of North America, but it is highly toxic, and pets should be monitored at all times near the tree.

Oleander ingestion can be dangerous for both humans and animals alike. Roots and stems contain the most toxic substances. The leaves and flowers of the oleander plant are extremely toxic, as are the seeds and fruit, nectar, sap, and juice. Even if there was standing water in which oleander leaves were floating, it would still be poisonous.

Aconitine, mesaconitine, hypaconitine, and other alkaloids have potent cardiotoxins and neurotoxins found in all parts of the Aconitum species, especially in the tubers and roots.

Patients experiencing Aconitum poisoning show signs of cardiovascular, neurological, and gastrointestinal symptoms, and there are often other symptoms like confusion and mania.

The snake lily (also known as the iris) is known for its bright color and bold shape. It is often used as a decorative plant in homes and gardens; however, many people don’t know that it is extremely poisonous to pets.

Early in the summer, you’ll see a familiar woodland plant with its tall spikes of bright pink and purple flowers. It grows in woodlands, along roadsides, and hedges. It’s also a common garden plant.

Foxgloves contain toxic cardiac glycoside compounds. You could be poisoned if you eat any part of a foxglove plant.

Wisteria is a climbing vine that produces clusters of hanging, fragrant flowers. Wisteria flowers are contained in hanging, velvet-like flower pods. All parts of the plant contain the harmful chemicals lectins and wisterin, but the seed pods and seeds are the most toxic. If ingested, symptoms such as stomach pain, vomiting, and diarrhea can occur and can last for up to 2 days once they develop.

Poison hemlock, closely related to water hemlock, is extremely toxic to both people and animals. It resembles a wild carrot or parsley plant due to its bunches of small white flowers and unique leaves. However, you can be sure it’s a poison hemlock if you notice purple blotches on its stem, ridged fruit, or if it grows unusually large (3 to 7 feet tall).

This species may flower throughout the year in southern states and from May to October in northern regions. All parts of the plant are poisonous, which causes various symptoms, including death. The berries are especially dangerous. When cooked, young leaves and stems are edible and provide a decent protein, fat, and carbohydrate source.

Belladonna, or Belladonna lily, which grows up to 5 feet tall, is native to Europe and parts of Asia. It’s recognized by its purple flowers and dark, inky berries known to have a sweet taste.

Belladonna is so toxic that even a small number of its seeds or berries can be fatal for humans, particularly children or animals. If you touch the leaves, they can cause irritation. According to the National Institutes of Health (NIH), it is not safe when ingested orally.

Despite known safety concerns associated with belladonna, people use the herb for asthma, the common cold, hemorrhoids, Parkinson’s disease, and many other diseases. Still, there is no evidence to support these uses.

Mistletoe is an evergreen parasitic plant with white berries that grows in the branches of some trees. It is traditionally used for festive decorations, and according to Norse mythology and medieval beliefs, it is a sign of peace and love.

All parts of the plants are poisonous. The mistletoe plant contains phoratoxin and viscotoxin, two poisonous proteins when ingested. Some mistletoes are more toxic than others, but there are over 1500 varieties of mistletoe in the world.

The Jerusalem cherry is part of the same family as the black nightshade. It has small, rounded, red and orange fruits. Jerusalem cherries are poisonous if eaten.

The effects of Jerusalem Cherry Poisoning mainly affect the primary gastrointestinal tract (usually 8 to 10 hours after ingestion) and the central nervous system, which can be extremely dangerous.

Avoid eating berries from an ivy plant, whether English ivy, Boston ivy, or any other kind of climbing ivy. Ivy berries are poisonous, but because they taste so bitter, it’s rare for someone to ingest enough to be poisoned. The Berries contain oxalates, which cause pain and swelling in your lips, face, tongue, and skin.

These berries are purple-black in color and contain the toxin saponin. They may cause nausea and vomiting, and they may also cause stomach cramps.

Yew berries are poisonous, but the flesh of the berries is safe to eat. However, the seed is the most poisonous part.

It contains a life-threatening poison called Taxine. This quickly absorbed cardio-depressant can kill within a few hours of ingestion in cases where large doses are eaten but may take up to 24 to 48 hours if small amounts are consumed.

Often there are no symptoms until it’s too late and your heart has stopped. Symptoms may include tremors, staggering, nervousness/anxiety, coldness, weakness/fatigue, vomiting, and low blood pressure.

Commercial growers grow castor beans for their oil and landscaping purposes. The poisonous seeds contain ricin, one of the deadliest toxins known, and consumption of chewed seeds can be deadly.

The castor bean plants bear large, handsome, fan-shaped leaves. The prickly spined bronze-red clusters of fruits look nice but are usually removed before they mature because the seeds contain ricin.

Although Virginia Creeper leaves do not contain urushiol, the irritating oil found on all parts of poison ivy, its sap can still cause irritation for some people. Additionally, its berries are toxic as they contain a high concentration of oxalic acid, which is mildly toxic to dogs and people.

Each leaf of this plant has three leaflets. In each set of leaflets, the middle leaflet has a longer stem than the two on the sides. The stem on the leaflet on the side can be so small as almost to be invisible. The two side leaflets are almost always directly across from each other.

Most poison plants contain a resinous substance that can cause unpleasant skin irritation when touched. The reaction, which causes skin eruptions that itch intensely and burn, can develop from 12 hours to 5 days later.

Poison sumac is characterized by white or green berries that hang in clusters around its leaves. Contact with poison sumac plants may cause an itchy, burning skin rash. Poison sumac is more likely to cause an allergic reaction than either poison ivy or poison oak.

Poison sumac rashes usually appear within 8–48 hours of exposure and can last for several weeks. Some people are more susceptible than others and may experience more severe symptoms. The rash is not infectious, but the oil can spread if it remains on the skin, clothing, or shoes.

Like poison ivy and poison sumac, poison oak releases an oil called urushiol when it sustains damage. When you touch the plant, your skin absorbs this allergenic substance.

Its leaves resemble an oak tree and look like a leafy bush that can grow up to six feet tall. It grows like a climbing vine in shady areas.

What to do When You Have Poisonous Plants

Removing the poisonous plants is probably safest if children and pets are in the garden.

Installing a physical obstacle, such as a low fence surrounding the bed, works well to prevent curious children and pets from accessing poisonous plants. When using a fence to keep plants from growing out of control, ensure no part overhangs the edge of the fence and remove any leaves, twigs, or flowers that fall outside the fence. Teaching children not to put leaves, berries, or wild plants in their mouths is also important for keeping them safe.

If you or someone you know eats a poisonous plant, call Poison Control for advice on what to do next.